A Near-Future Retelling of Beauty and the Beast

Alainn’s father is not a bad man. He’s a genius and an inventor. When he’s hired to create the robot Rose, Alainn knows taking the money is a mistake.

Rose acts like a human. She looks exactly like Alainn. But, something in her comes out wrong.

Believing that a life of servitude lies ahead, Alainn finds a very different fate awaits her in the company of the strange, scarred recluse.

Like I said in my May Wrap Up & June TBR video, I chose Ensnared because it is a Beauty & the Beast retelling and I already requested and was approved for Geekerella so I thought hey why not. I assumed the book was going to be YA because when I first requested it the book cover was this… 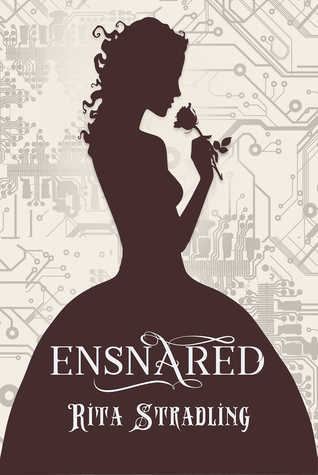 But upon delving further and further into the book, it DEFINITELY WAS NOT.

So, before I get ahead of myself let’s start with what I liked about the book shall we? God, I have to do this review in bullet points because I cannot explain well due to the confusion that is this book.

“She fell asleep halfway on top of him-“

How? How???? How can you fall asleep??? Where is the action? The explanation? The sensation that Lorccan might be feeling? I read historical romance like there is no tomorrow (who reads TWO historical romance books in a day? That’s not normal!) and occasionally I also read erotica and damn straight they explain or write down what happens in bed! You don’t just fall asleep!?! I am affronted!

And it’s not just that, the plot flow was so jumpy that when the author does semi-explain the background of the main characters, you barely understand what is going on. The author gives you a vague story of what happens and then goes along and continues with another plot element leaving you to try and complete this puzzle of a plot to gain an understanding of the overall plot.

Plus, the pacing of the plot doesn’t match. In the beginning it was a (very) slow pace where you get the feel for the predicament that Alainn is in and how Lorccan is just a weird quirky guy that has agoraphobic and mysophobia but towards the end it goes on a break-neck speed what with saving Lorccan, battling deranged robots and whatnot and then the ending is back to semi-slow.

Aside from the plot flow, I also felt that the world building is really lacking and this is coming from a person who doesn’t really give a shit about any world building at all. It wasn’t explained how robots are used in this world; are they slaves? are they companions? what types of robot are there? The author assumes we know everything about the world before pushing us in it.

Another thing that wasn’t explained well was character quirks and some plot elements. Towards the end of the book we meet Shelly, Lorccan’s good friend and also ex-girlfriend and it is there that you read that she has anxiety issues but the thing is there was no indication anywhere in the earlier sections of the book that she has an anxiety disorder. So, it was quite a shock to me that she comes and meets Alainn at the end of the book and verbally assaults her. There were quirks regarding Lorccan what with his mysophobia, Alainn with her hero complex, Colby with his need to cheat in his PhD, Connor Murphy with his gambling addiction that was not explained in detail like why do they have these disorders and compulsion. The author like I said at the top gives very vague background stories to semi-explain them but it is not enough. At least not for me. Like seriously I really want to know what happened with Alainn and her best friend? I only get the jist of it but I don’t understand the bigger picture.

It was great that the author included these disorders in the plot but it would have been even better had she explained them properly so it doesn’t feel like she is using some cheap gimmick just to make the plot more interesting.

Also, when they disabled Rose (the sentient AI) they didn’t say what happened to her after she was disabled. Mind you they disabled her when they were in court so aren’t the people shocked that this robot is seemingly malfunctioning? what happened to her robot body? What was the reaction in court? What was the verdict? So many questions so little answers.

I am on the fence regarding this issue, on one hand I think their romance is cute but at the same time I find it disturbing because Alainn and Lorccan lived in isolation for awhile where it’s just the two of them and a bunch of AI. It makes you wonder whether their romance is based on actual love or just the need to be with any other human within the area and you have to realize that Lorccan has never been around another actual human being in awhile aside from his parents.

I also felt that the sex between them was too soon. Alainn lived with Lorccan for a month-ish and suddenly out of nowhere (again with the plot jump) she starts liking him (I don’t know if this is due to her need to be with another human or its actual love) and starts making out with him then later that night, Lorccan has a nightmare and Alainn comforts him and BAM! They are already getting it on and once they started, they were getting it on like rabbits!

Now now, I know what you all must think why did I give this book a 3/5 if everything I wrote was practically bashing it? I in all honesty still enjoyed the book and found that it showed promise and I liked the banter and the relationship between Lorccan and Alainn, if I don’t think about it being really questionable, I thought it to be quite sweet and endearing. I also liked how Rosebud and the monkeys are good AI and they were kind to Alainn (at least the monkeys were, Rosebud was kinda mean sometimes). I also liked how Colby (Alainn’s brother) pulled through at the end and tried his best to help Alainn help Lorccan. Also, it was cool to see how Connor Murphy is a brilliant inventor and scientist yet has gambling addiction.