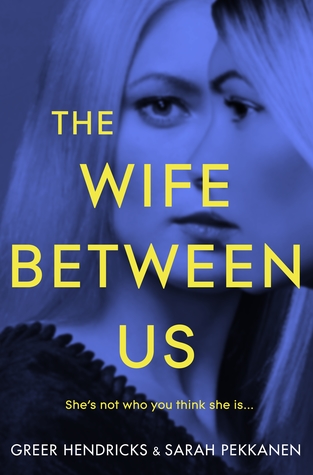 Title: The Wife Between Us

When you read this book, you will make many assumptions.

It’s about a jealous wife, obsessed with her replacement.

It’s about a younger woman set to marry the man she loves.

The first wife seems like a disaster; her replacement is the perfect woman.

You will assume you know the motives, the history, the anatomy of the relationships.

You will be wrong.

This book was decent for me nothing much for me to say about the plot nor the characters; they were okay, engaging enough to for me to be interested but not so much so that I was completely mind blown but the part I would like to discuss was the first part of the book (the book was split to three parts btw).

I truly felt that Part 1 of the book was the best because it truly bamboozled my mind and left me so off balance that #siswasshook.

In part 1, there are two POV coming from Nellie and Vanessa. Vanessa being Richard’s unhinged and unstable ex-wife and Nellie Richard’s beau and newly minted fiancee’. From Vanessa’s POV you get to see how she is struggling with her divorce from Richard and how is barely coping with her new job and is basically a shadow of her former self and with Nellie’s POV you get to see how she met Richard, how she fell in love with this guy who is practically a Prince Charming incarnate.

From Vanessa’s POV we understand that she has stalking tendencies and is stalking Richard’s new beau and the more you read the more you feel like Richard sure has a specific type of woman he likes as Nellie and Vanessa sound like a carbon copy of each other until towards the end of Part 1 where you realize holy shit you got everything wrong.

Nellie and Vanessa are the same person and the POV is not between two people but in actuality between two time lines. Nellie being Vanessa’s pet name by Richard when they first met and how they fell in love and Vanessa the woman she is in the present, all broken and suffering from PTSD and shit.

I don’t know about you but the writing style completely threw me off and from there I had high expectations that the consequent parts of the book would blow my mind as well but then part 2 dragged because I wanted answers. I wanted to know why Richard was such a threat to Vanessa. What exactly did the man do?

I mean, yes I understand what the authors were going for but really I was close to finishing the book and still I have yet to read why was Richard the antagonist and even when I did find out it wasn’t explained well. Like what was his motive? and what is up with him and his sister. She seems oddly obsessed with him all incest-y. Like whutttt???

And the plot twist at the end felt so ugh. At the moment when I read it, I was all for it because I thought it was so cool how Richard’s actual new beau (named Emma btw) was the daughter of the lecturer Vanessa had an affair with when she was younger and she stalked Vanessa to get revenge by stealing Vanessa’s husband and essentially ruining the picture perfect marriage that Vanessa supposedly had.

I genuinely thought it was interesting how Vanessa laid the plans for the affair to bloom between Richard and Emma so she can be free all the while Emma was also conspiring to take the husband anyway. Unknowing co-conspirators ya know but now in hindsight it is a bit much because like how even? I just felt like it it needed to be included it could’ve been written better.

But other than that, the book is still a pretty decent read.