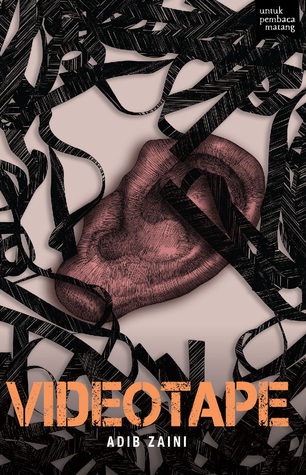 Razak is a teen that was raised in a toxic family life and it’s due to that that he spends most of his time from home which leads him to get into trouble.

He only has a select few close friends that he now considers as family due to their bond of friendship whereby they were there for him through thick and thin.

One day, whilst doing a school cleaning as a school punishment Razak and his friends found a videotape hidden in a storage room and before they knew it they’re embroiled in a mystery that will change the course of their lives.

(This is the best interpretation I have for the synopsis okay, I am sorry, my Malay is abysmal)

I was genuinely surprised that I highly enjoyed this book. It was such a fun and nostalgic read. I say nostalgic because not all writers can write how a teenager speaks or acts, at least not accurately but with Adib reading his words really brought back my own memories of when I was a teenager in high school especially a local Malaysian high school. The banter between the friends, the teasing, everything just brought all good and sometimes bittersweet memories to the surface and just left me feeling all nostalgic for my own high school experience. Adib’s writing was realistic and engaging that I truly could envision myself being friends with this group of teenagers had I too been in the same school.

The only gripe I have with this book that made knock a point off in rating was how the mystery surrounding the videotape was unraveled. Going into this book I had expected it to lean more towards being a mystery whereby it will be solved by a group of teens ala The Famous Five novels but what I got instead was a book focusing a lot on the friendship between Razak and his friends. Not that I did not enjoy it but it makes me wonder if selling this book as a mystery book was correct because I felt that the mystery aspect of the plot fell flat.

The ending and the exposure of the perpetrator was too rushed that it left plot holes left and right. I did not know why the perpetrator did what he did. Was he mentally unstable? What was his motive both in doing what he did as well as creating a videotape on it. Who was his partner in crime? What happened to Razak’s dad? Why was Razak’s dad such a douchebag? The ending just left me with more questions than answers which is such a shame because the book was such a good read.

Overall, I would still highly recommend this book but don’t hope that the ending will blow your socks off. Keep your expectations low for the ending for this book.