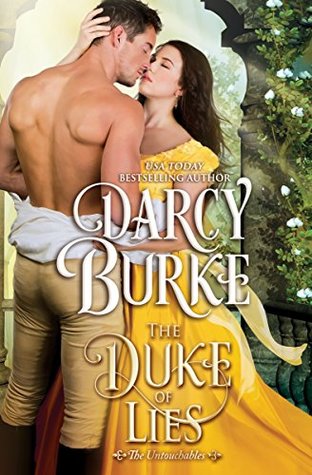 Title: The Duke of Lies

Verity Beaumont has suffered domineering men most of her life, first with her father and then with her husband. Free from both men, she has finally found peace. Even meeting a kind and hard-working gentleman who just might be the perfect father her young son so desperately needs. But as she dares look to the future, her carefully ordered world is shattered when her dead husband returns.

Imprisoned in America during the war, Rufus Beaumont, Duke of Blackburn, wants nothing more than to return to his native England. He longs for comfort and safety away from the horrors of battle, only the life he returns to is not the life he left. He must convince his wife that their marriage is worth fighting for, that he’s not the man he was. But when the truth about what happened to him leaks out, he must prove that not everything about him, especially his love for her, is a lie.

Okay to be quite honest I completely forgot I had joined a book blog tour and whats worse I haven’t even downloaded the book till just now but I knew I could make it in time because hellooooo historical romance + ezza = THE BEST COMBINATION OF BOOK READING EVER! So yeah I managed to finish reading the book in under 2 – 3 hours and hence my review for it.

Duke of Lies surprisingly is an okay book. I say I am surprised because I expected there to be some tension or drama whereby the main protagonist will fight and the female protagonist will run away dramatically and the guy will have to chase her and comfort her *I swear I am reading FAR TOO MANY shoujo manga’s* but there weren’t any in this book. Yeah there was tension and drama but not from the two protagonists it was an external source of drama.

SPOILER ALERT BELOW! READ AT YOUR OWN RISK!

It was refreshing I suppose because the relationship between the two main characters; Christopher ‘Kit’ Powell and Verity (can’t remember last name), was very very healthy and stable. Yes, Kit lied at first saying he is the Duke of Blackburn but Verity was intelligent to see through his lies and confront him and just when I thought Kit was going to lie again he came clean and I am here like ‘WHUUUTTTT???????!!!!!’ and so from then on they were pretty candid and honest with each other, like for real yo. They tell each other everything and I am like astonished because I rarely read such honesty being written between two characters so early in the book.

Aside from the healthy relationship between Kit and Verity, I also enjoyed how the writer wrote Verity to be a smart woman in her own right and not written to be ‘smart’ but dumbing every other character in the book to do so.

Just one thing I didn’t like about the plot and that was the ending whereby the truth of what actually happened to the Duke of Blackburn, Rufus, was revealed. I felt it was very convenient and the plot points not fleshed out properly.

Apart from that I enjoyed most of the book and probably will read more books from Darcy Burke.