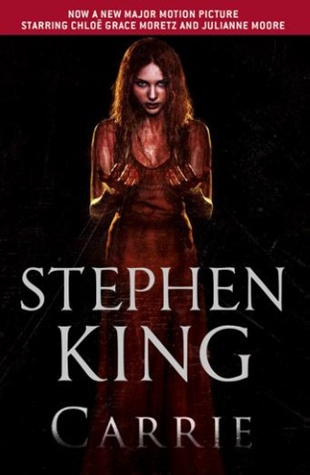 Carrie knew she should not use the terrifying power she possessed… But one night at her senior prom, Carrie was scorned and humiliated just one time too many, and in a fit of uncontrollable fury she turned her clandestine game into a weapon of horror and destruction…

Will my review be sufficient if I just state that I loved the book? Must I reason why I love it? I guess I must I mean this is a book review blog anyway. Okay, where to start. You can say I relate and empathize with Carrie. The poor girl was horrendously bullied by her peers at school for things she has no control over and also because she was just different. Yeah, it doesn’t help that Carrie is just a very shy girl, a bit on the kooky side what with her religious beliefs but have you seen the mother??? That woman was cray… I am amazed that Carrie managed to just be SLIGHTLY kooky. If you overlook her outdated fashion and her shyness, Carrie is quite normal.

I hated that everybody just passed judgement on her without getting to know her or her backstory. I mean legit nobody in the whole effin town helped?? NOBODY??? Everybody knew Carrie had a very abusive mother yet nobody came to help her? Befriended her to ensure she at least has one friend outside her home to make her feel okay that yeah life now sucks but eventually she can leave her house and she can explore the whole world? Is it any wonder that Carrie just snapped when the pigs blood was dropped on her?

To go to that dance, she had to stand up to her mother who was at that point Carrie’s whole world? Carrie had to take a leap of faith and trust Tommy and Sue wasn’t pulling a prank on her? So, yeah when Carrie finally just had a mental breakdown and started wrecking havoc on the whole town burning everything I was like

Like look at it this way. They deserved to be burned, they didn’t help her, she owed them nothing.

Aside from having a truck load of empathy for Carrie, I also liked how Sue Snell felt confusion for he intentions in making Tommy go with Carrie to the dance. She wasn’t doing it out of the kindness of her heart and her confusion and dilemma provided a sense of realism for her character.

The only part I didn’t like in the book was how Carrie killed Billy and Chris so fast. I would’ve tortured them until they mentally break. I won’t kill them. Just mentally break them so they would suffer like how I suffered (If I was Carrie that is).

As much as I like this book, I do realize it is not for everybody. The plot is very basic, characterization is mediocre and the gore is sufficient at best but hey its only 248 pages so it won’t even take you a day to finish it. So, I say give it a go especially since it was Stephen Kings first notable work.