Welcome one, welcome all! Today is our very first match between Ezza and Stacy Reid, author of Wedded by Scandal series. Who will win this match? Nobody knows but judging from Ezza’s terrible track record for historical romance we all can guess who will be victorious.

Stacy starts off strong making Ezza wary as she starts off the plot of the book right off the bat with some sexy times between Richard Maitland, our male lead character and some random married woman. Before Ezza can strategize her next move, Stacy goes in and throws a punch, as she reveals that Richard has had his heart broken and in the worst possible way when Lady Aurelia the woman he loved rejected him for somebody with more wealth AND terminated her pregnancy; heartbroken the poor man went off to war.

Barely finished with chapter one and already Stacy has thrown some serious punches. I am not completely sure Ezza can survive this match in one piece to be honest. Let us all pray for her soul.

Ezza though groggy sees an opportunity to strike and goes for a kidney punch when she realizes that Stacy has completely glossed over how Richard found his daughter, Emily. She felt that Stacy missed an opportunity to allow the readers to empathize more with Richard by allowing them to follow his journey in finding Emily; the anguish, the happiness, the personal cost he underwent when he was cut off by his father and deciding he will be his own man.

Unfortunately for Ezza, Stacy recovered quickly and is now striking her with multiple quick jabs by making Richard and Evie (our main female lead) be friends for more than 6 years so you definitely know that their feelings for each other is the real deal (damn the poor girl loving the man for 6 years before she went and actually tried to get him, I can completely relate) then showing that Stacy isn’t afraid of including what seems to be almost a taboo subject in historical romance; she shows that her characters do fart, vomit and have stretch marks which I the narrator must applaud.

Stacy with renewed vigor goes in for the kill and unleashes a flurry of jabs before finishing off her opponent with an uppercut for the knockout when  Richard’s confession of what he truly thought of Evie was revealed causing Evie to realize that Richard did not hold her the same esteem as she did him hurting her beyond reason; this caused Evie to feel as if their friendship was based on lies instead of mutual respect.

And that ladies and gentleman is the end of our little literary battle between Ezza and Stacy Reid whereby Stacy is the ultimate victor of which let’s be honest she never stood a chance anyway, that poor sucker.

Before we leave the match as it is I would like to thank our sponsors, Netgalley, for kindly providing the book to be reviewed. 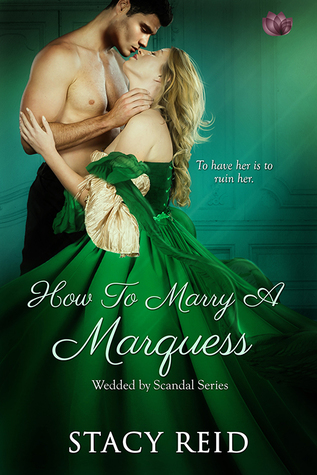 Title: How To Marry a Marquess

Lady Evie Chesterfield is a darling of the ton who refuses to become engaged. She’s been desperately in love with her brother’s friend, Richard Maitland, Marquess of Westfall, since forever. But the dark, dangerous marquess only sees her as a friend and refuses to marry any woman. When circumstances change and Evie has no choice but to take a husband, she decides to convince London’s most notorious gentleman to marry her by seducing the scoundrel.

Richard Maitland decided long ago that he wanted nothing to do with love. So when the gorgeous, off-limits Evie asks him for lessons in seduction, Richard knows he’s playing with fire. Despite Richard’s determination to protect her from his dastardly reputation, he is tested at every turn by his need for the infuriating, but enticing, Lady Evie. Before too long he is faced with making an impossible choice…