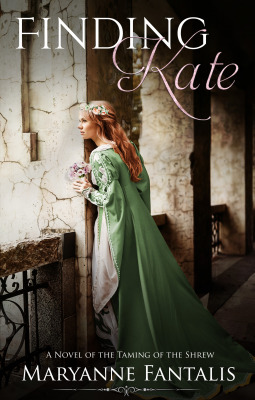 Kathryn’s strong will and sharp tongue have branded her a shrew in her small town. Now, not even the generous dowry offered by her wealthy father can tempt any man to court her. But when Sir William rides into town on his magnificent war horse, Kathryn’s world turns upside down.

William is like a burr in Kathryn’s side from the very beginning. Even the way he insists on calling her “Kate” irritates her thoroughly, yet she can’t keep from listening for his voice. Though he claims he is the only man for her, she is certain he only wants her rich dowry. When he proposes marriage, she accepts as a way out of her miserable home.

Freed from her cruel family and judgmental town, Kathryn must decide whether she will continue her battle of wills with the sometimes charming, often maddening Sir William. Will she remain the shrewish Kathryn or find a way to be Will’s Kate?

Ever since I read some reviews on Goodreads saying that Kate changed to keep Sir William happy, I was dead set to hate this book with a vengeance! Because in my mind a woman shouldn’t change anything about herself due to the whims of a man, the feminist in me was practically screaming in protest but the more I read the book the more I saw that this wasn’t the case and I was gobsmacked!

Let me go back and explain from the start. The book is divided into three parts. The first part is before Kate met Sir William. Here she is this woman who is dubbed a shrew due to her spunk, extremely sharp tongue and inability to put up with utter nonsense which unfortunately repels people who does not understand where she is coming from. At first, I was very pro-Kate. I loved her spunk, her wit and her refusal to back down no matter what the cost and also the debates/banter she has with Sir William. I also loved her IDGAF attitude but the more the book progressed her attitude started to wear on my nerves. I don’t know how to say this but I started to realize that Kate is a very bitchy woman. Like I love the whole independent thing and the intelligence is what a woman needs thing but she doesn’t know how to apply them properly. She picks fights with everybody. She forces people to empathize with her yet she doesn’t reciprocate the gesture and when people try to help her by warning that there are a few suitors who are using deception to get closer to her sister Blanche, she completely shuts them down and refuses to listen because she thinks if she who is so intelligent can’t notice it then what do these people know. I felt that this is very selfish and condescending of her. Yes, her friend (her ONLY friend mind you) doesn’t have the book smarts that Kate has but that doesn’t mean she isn’t intelligent. So my earlier feeling of being pro-Kate slowly changed to anti-Kate and this woman was annoying me to no end. She doesn’t use her intelligence for the greater good, if she had used it properly she would get a lot more things done and honestly it wouldn’t kill her to be nice to people. She is just so nasty in some parts of the book I am not surprised why nobody likes her. I wouldn’t like a nasty and unkind person too.

So, we go to the next part where Sir William and Kate have already married and they are at his house. There the once sweet and understanding Sir William has a complete 180 degree change in personality and is nasty, mean, inconsiderate and sometimes irrational. Here, I saw that he is not trying to break her, he is just trying to change her perspective and he had to use brute force because Kate refuses to believe any sweet and kind words he says due to her insecurity that Blanche is better than her. Also, Kate keeps butting heads with Sir William and the part where she didn’t eat for days because Sir William kept changing his mind could have been prevented had she just been humble enough to ask whether she could eat. Humble not broken. There is a difference. Only through Sir William’s systematic pseudo-torture could Kate finally see the error of her ways and that instead of constantly fighting people to prove a point and subsequently acting how they thought she would act she could do the opposite and conform to societies rules yet at the same time still maintain her worth.

So, now we come to the last part and this was my favorite part because Blanche had eloped and her father was so shocked and could not believe that his favorite child defied him and yet Kate, the one who is the most rebellious and stubborn, had done exactly what he asked her to do and the win for Kate at that moment was so real and triumphant, I was there in my mind slow clapping for Kate. So, at the end Sir William proposes a game whereby Kate is the winner because the rules of the game was that whose wife follows the order of her husband to the T is a winner and Kate who knew this is a test won because she believed her husband to not do this with spite but just to show the townspeople that Kate could be nice and different if she wishes to.

What made me give this book a 5/5 was Kate’s character development. She went from this insecure, hostile woman to a woman who knows her worth regardless of what happens and also how she is finally humble enough to apologize to her only friend as to how shitty of a friend she has been. I also loved how at the end the dude who married Blanche is shocked at how cruel, unfeeling and bossy Blanche’s true personality is. I’d say serve you right for not using the intelligence that god gave you to see the truth. At the end, it was Kate who had the last laugh. she was married to Sir William who knew her. Who didn’t mind that she was intelligent or that she had a sharp tongue and is independent. He didn’t want to change her, he just wanted her to see and use said intelligence that benefits everybody.