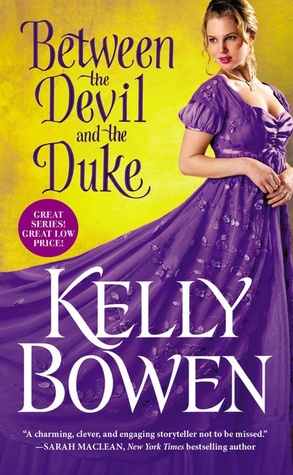 Title: Between the Duke and The Devil

Their love was always in the cards.
He should have thrown her out. But when club owner Alexander Lavoie catches a mysterious blonde counting cards at his vingt-et-un table, he’s more intrigued than angry. He has to see more of this beauty—in his club, in his office, in his bed. But first he’ll have to devise a proposition she can’t turn down.

Gossip said he was an assassin.
Common sense told her to stay away. But Angelique Archer was desperate, and Lavoie’s club offered a surefire way to make quick money—until she got caught. Instead of throwing her out though, the devil offers her a deal: come work for him. Refusing him means facing starvation, but with a man so sinfully handsome and fiercely protective, keeping things professional might prove impossible.

Okay the book was so engrossing I read and finished it within a few hours and I think this is the last time I will finish reading at 4 am, ever. My body can’t take it anymore. Ageing does this to a person apparently.

To start off let me just say that I dislike the male leads name not because it doesn’t suit the character or anything but more because that name, Alex, is also my ex’s name. To put a long story short we had a brief fling a few months back which became a complete fiasco which I completely regretted.

Anyhoots, I found it very sweet how Alex Lavoie falls in love with Angelique for her mind and her talent with numbers and it is so cute how everybody around him notices he has fallen in love with her except himself and how they tease him about it.

Another thing I liked was that Angelique wasn’t a virgin anymore and that her first sexual experience wasn’t that great and how it left her confused and disappointed. Also, the ending of the book never stated (or it did and I missed it) that Alex and Angelique will get married or anything. It means that they will enjoy their relationship at their own pace and crud whoever thinks the opposite.

Plot wise, it was great especially when they found out the reason why Angelique is losing her family inheritance and asset AND the honest to God truth as to how her mother died. I definitely did not see that plot twist coming. The plot twist was good, like reality TV good.

Last but not least I also liked how the author introduced the characters of which might or might not be in the next book. It is hard to say. Kelly gives/writes all these characters who are mysterious and have mysterious backgrounds who also have awesome skill sets and jobs that are bizarre which then allows said characters to fester in your mind longer than it should with the burning question of who are they and thus from that you want to know more which will then lead you to read whatever books that Ms. Kelly has already written.

If you noticed, I didn’t talk much about the characterization of the characters themselves and this is because I felt like their characters are more or less similar to other characters that I have read in other historical romance novels so I found it redundant to comment about it.