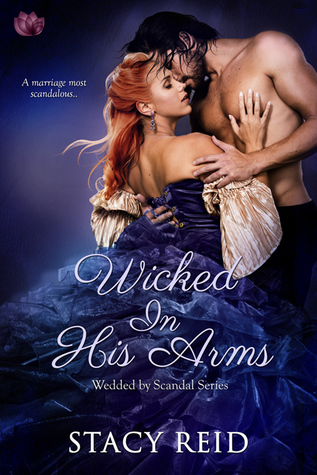 Title: Wicked in His Arms

Tobias Walcott, the Earl of Blade, has learned it is best to exercise rigid control over his passions and emotions in all that he does. Uncaring that it makes him seem cool and aloof to most in the ton, he is content with his desire to only woo agreeable and demur females. Then unforeseen circumstances see him trapped in a closet at a house party with the last woman he would ever make his countess.

Lady Olivia Sherwood is everything he should not desire in a female—unconventional, too decisive, and utterly without decorum. But passion ignites between them and they are discovered. Honor demands they wed, and while Tobias finds himself unwillingly drawn to the bewitching beauty, he must do everything not to tempt the passion that burns in him for her, lest it leads to disastrous consequences.

I swear I am embarrassed that my current favorite genre to read is historical romance and the reason why I chose this book in Netgalley was because of the half naked man on the book cover. Imma be real with ya’ll. I don’t like those super beefed up half naked men I always see on book covers especially that of historical romance. I like guys who are lean but muscular kind of like the guy on this book cover. I am telling you, this obsession with historical romance novels will only end once I get a boyfriend and get first hand action of my own instead of just reading it. I unfortunately realized too late that this is the second installment in the Wedded by Scandal series but hey its better than my Maiden Lane series where I missed 10 books in between and jumped from the 1st to the 11th

So, the main characters for this book are Tobias and Olivia and I love them both. They both are so flawed and are constantly bickering with each other but it works. I absolutely love how Livvie (Olivia) does not know how to restrain herself and just goes all gung-ho into a situation without thinking of the repercussions whereas Tobias is the opposite where he is more calculative and mindful of his reputation and of people close to him and the dude seriously has communication problem with his wife it’s so obvious he cares for her but he doesn’t know how to say it and worse he doesn’t even realize it, the poor fool.

Also, I love how Olivia was so bad ass and damn is she independent! She knew she was cornered into marrying Tobias so she laid down her terms and she will be damned if she didn’t keep her man (one of the terms was that he be loyal) and she went and confronted Tobias’s ex Arabelle and literally threatened her by saying ‘if you come near my husband again I will put a bullet in you’ and I was all OMAGA! SHE DID NOT JUST DO THAT! AND AND… when the stress of the strained relationship she had with Tobias got too much for her to handle she up and left the man to go and so quote give them both space so she can stop loving him and they have an amicable marriage whenever she comes back be it weeks or months from now. I have read a fair amount of historical romance and never have I read where the female protagonist up and just left her man like damn! That wasn’t even when Livvie didn’t trust Tobias to defend her honor, she went to her brother who sexually harassed her and called him out for a duel and got to smack him about too! Both with her sword (or something) and her fists. I applaud how bad-ass Livvie is in this book and considering she really loved her husband it was a feat that she managed to leave him for 6 weeks without him ever managing to locate her before he found a way to make her come back to him. The way Tobias finally managed to find a way to bring Livvie back to him was so sweet and I’d come back to him too if I were her.

In conclusion, it is safe to say I REALLY enjoyed this book not because of the plot but because of the characters. Also, I forgot to add that the book was split between the POV of that of Olivia and Tobias so it was great fun to see how these two react to each other and the situation in their perspective. I cannot wait for the third installment and getting my hands on the first book. This book exceeded my expectations to be honest and I am so happy I got to read it.