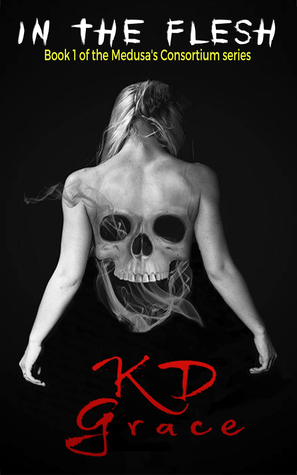 Title: In the Flesh

When Susan Innes comes to visit her friend, Annie Rivers, in Chapel House, the deconsecrated church that Annie is renovating into a home, she discovers her outgoing friend changed, reclusive, secretive, and completely enthralled by a mysterious lover, whose presence is always felt, but never seen, a lover whom she claims is god. As her holiday turns into a nightmare, Susan must come to grips with the fact that her friend’s lover is neither imaginary nor is he human, and even worse, he’s turned his wandering eye on Susan, and he won’t be denied his prize. If Susan is to fight an inhuman stalker intent on having her as his own, she’ll need a little inhuman help.

Okay I was quite close in giving this book a 5/5 BUT the ending totally killed it for me. It isn’t as bad as I am making it out to be I was just quite disappointed with it that’s all so before I get to explaining why I didn’t like the ending let us recap the whole review first.

I felt that the plot was great as it really swept me away starting from the first sentence. Also, it was nice how the plot started in the middle of things and went on from there and this caused the whole plot to read like one long episode of Supernatural minus the appearance of Sam and Dean which is a shame I tell you. A damn shame. They would have fit perfectly with the plot even if it is just as eye candy. So, because for me it read like a Supernatural episode its super fast pacing of getting shit done within days didn’t really phase me because hello that’s what happens in Supernatural and that is also the reason why when the story has angels, vampires, succubus and the sort in the plot I really didn’t even bat an eye because it is exactly the same in Supernatural. After watching so many seasons of Supernatural one just goes with the flow of the plot.

Going on to the characters, I felt that they were okay for me. None of them aside from Medusa really gave me any lasting impression and honestly for me Susan was honest to God getting on my nerves. I can’t explain why she annoyed me she just does. She thinks she so innocent but girl you were the one who released that demon-thing so don’t try to wiggle yourself out from being responsible. She be all in denial she has any powers, her powers are that of a scribe and I have no idea what it’s supposed to do anyways and the reason why I disliked the ending was because Susan got to be the bad ass character that has super bad ass powers not only at the end she became a vampire but she also became a vampire that is immune to sunlight due to the help of the demon-thing and then she started being all arrogant and sooooooooo confident in her power. Pssshhhhh… And also the demon-thing went down without a fight. Honestly he was written to be this really powerful entity which uses the power of love, seduction and lust to get what he wants and at the end he and Susan had an uneasy truce and whatnot. I mean the first half of the book had everybody freaking out because he is so good at making people love him until there is no resistance and he gets what he wants always so I expected him to go out guns blazing and refusing to lose no matter what and not have the climax be all anticlimactic. I guess you can say I did not like the happy ending. I really hope the next book the demon-guardian-thing will use all its cunningness to get back at Susan. That would be a great read.

Aside from that, I also liked how Magda uses her consortium as her pawns against evil or whatever that stands in her way. Better use their supernatural powers for good is what I say. All in all, ‘In the flesh’ is a great read if you want something fast paced, has a Supernatural feel to it and also has erotica in it.