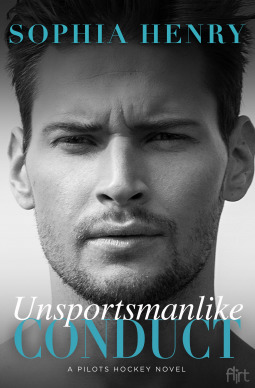 Kristen Katsaros wants a life full of adventure and laughter. After a difficult childhood, her motto is to live each day like it’s her last—because it just might be. So when Kristen’s parents send her on a post-grad singles cruise in the Caribbean to meet a Greek husband, she promptly hooks up with the hottest guy she’s ever met. Pasha’s decidedly not Greek, but Kristen gives him a pass because he’s got fun written all over his rock-hard abs.

Pavel Gribov, the cocky playboy of the Detroit Pilots hockey team, can score any girl he wants. But when a teammate drags him on a singles cruise, he can’t resist the chance to help out a drop-dead gorgeous damsel in distress by pretending to be her boyfriend. Before long, the fake fling turns intimate,  fueled by something much deeper than lust.

Kristen and Pasha both agree to walk away once the cruise is over, but reality hits like a slap shot when Kristen finds out Pasha lied about everything. Just when she’s ready to start living again, the two stubborn survivors must decide if they can bear to lose the best thing that ever happened to either of them.

I really liked this book actually. The plot was great, unrealistic aside from Kristen having CF but otherwise great. I mean come on, I too once in a while daydream that I am on a cruise where I have a great time with a drop dead gorgeous man who is mysterious and broken and I am the only one who can heal his wounds. I now really do wish I was on a cruise being swept off my feet by a gorgeous man on a week of fun, you guys have no idea how long I have been single, give it another 4 years and I can say I would have been single for a decade. A DECADE!

Anyways back to the review, I really liked how Kristen Katsaros aka KK, isn’t your typical girl next door or nobody girl, she in fact is suffering from CF (Cystic Fibrosis) and thus her days on God’s green Earth are numbered so she goes YOLO with life in anything and almost everything now which I completely agree because if you gonna die you might as well go out with a bang and have as much fun as you can. So in the book KK is coerced by her parents to go on a cruise to meet a nice Greek man to settle down with but instead she meets Pasha, a hot Russian man who completely blindsides her because he is oozing hotness, okay not really, he helps her out by pretending to be her fake boyfriend so she can escape Spiros, her good-willed creepy stalker admirer who for some reason cannot understand that she does not like him that way. Whilst they continue this charade they realize that they in turn really do have feelings for each other but they both are keeping a secret that they think if revealed will cause the other to be disgusted with them.

I like Pasha’s secret more than KK because his secret seriously makes him a douchebag and thus he has very good reason as to why he doesn’t want to tell KK his secret. At first I didn’t fully understand his secret which was that he tried to break up KK’s bestfriends relationship (Auden’s relationship) but when I read what he actually did I can soooooo understand why KK hated him because hello if some douche tried to break my bestfriends heart and relationship just because he can’t handle other people being happy I will ensure said guy will feel my wrath in the form of brass knuckled punch to the face.

KK’s secret is just that she has CF and she thinks that there is no way Pasha would fall in love with a sickly girl but he did. I also loved how Pasha has two sides to him, one he shows to only KK and one he shows to the world. The one he shows to KK is someone who is caring, understanding and a protector whilst the other side he is just an arrogant, egoistical douche.

After meeting KK, Pasha realizes that what he has been doing all his life (being a douche that is) is wrong and I really liked how he sucked his ego in and went and apologized to everybody he has ever wronged especially to Auden.

My fav part in this book was after KK was in an accident but was awake when Pasha came in and he confessed his feelings but she pretended to be asleep to hear what he had to say and I thought you little trickster but to be honest I probably would have done the same and if he didn’t say what I wanted to hear I probably would’ve smacked his head and told him to try again.

*Okay I just googled/read an article about people living with cystic fibrosis THUS I now understand why KK is all ‘I don’t want to lead him to hope we have a future togethre’ because in the book it wasn’t written in detail detail and how it affects ones life so I thought it was like asthma or something I didn’t know it was a hella lot serious! so yes I feel for KK more now.