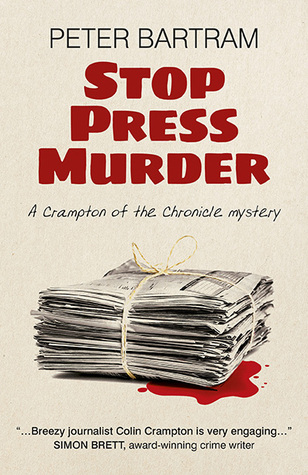 FIRST, the saucy film of a nude woman bathing is stolen from a What the Butler Saw machine on Brighton s Palace Pier. NEXT, the pier s night-watchman is murdered – his body found in the coconut shy. COLIN CRAMPTON, ace reporter on the Evening Chronicle, senses a scoop when he s the only journalist to discover a link between the two crimes. HE UNCOVERS a 50-year feud between twin sisters – one a screen siren from the days of silent movies, the other the haughty wife of an aristocrat. BUT COLIN S investigation spirals out of control – as he RISKS HIS LIFE to land the biggest story of his career. STOP PRESS MURDER, a Swinging Sixties mystery, has more twists and turns than a country lane. It will keep you guessing – and laughing – right to the last page.”

I put off reading this book for the longest time because when I read it in my Kindle App, the lines or whatever (words? sequence? dialogue?) are kinda messed up so I get confused as to who is saying what but putting that aside, surprisingly, I actually really enjoyed this book and only now realized it is the second book and there is an existence of a first (seriously Netgalley… must I go to Goodreads to find out this is the second in a series?)

As far as I remember most of the murder mystery books that I have read, their POV is usually the detective or the detectives buddy or somewhere along those lines in detectivery (not a word I know) but here the POV is from a crime journalist. So, since Colin Crampton is a crime journalist the pace of the plot was just GO!GO!GO! From the get go and it was quite understandable considering aside from trying to get to the bottom of the ‘Milady Bath Night’  murder/mystery he also had to write for the paper of which he was working for and that needed constant updating even if what he updated was just a rehash/recycle of a previous article of his.

Whilst the plot at its essence was quite predictable, where the motive was one where it dealt with human emotions rather than any sort of macabre killing fest, it was still enjoyable to read especially since I was so caught up with Colins’ deductions and theories that I made a mistake that he made which was to disregard the most simplest answer that was available to him by making yet another mistake which was to underestimate the opponent. So when it was seen that he was wrong I was gobsmacked because the answers were all there in plain sight and I just disregard it like Colin did because I, like him, underestimated this one oddball of a character because I didn’t think that said character would be capable of murder.

I loved how at the end when Colin was explaining why this incident happened to Fanny (granddaughter to one of the twin sisters), he said that it all started with the seed of envy and how even though envy was just one of the seven deadly sins it encourages the other 6 by burning their fire and nurturing it until it became an inferno (okay the whole nurturing the fire thing was my words but you get what I mean).

Another thing that made me think this book was great was how one murder was connected to a theft which was then connected to another death that happened ages ago. Like none of this had any chance of being linked together because its MO was so different but Colin realized or had a gut feeling that it was connected and lo and behold it really was. It would have been gone really bad had Colin/the author not explain how it was connected which thus explain the motive for murder.

So all in all it was a really enjoyable book and I had no complains about it except for the whole misalignment thing in my Kindle.